Near Coalpit Bank (fn. 36) was Bank House, home of the Hartshornes and later of Richard and William Reynolds. (fn. 37) The older part is a tall 2-storeyed building of the early 18th century with fronts of four bays to the south and west. In 1721, for Richard Hartshorne, (fn. 38) the east side was lengthened and refronted as seven bays with a central entrance. A little later short single-storeyed walls were added at each end of that elevation: the northern one concealed a small extension, and later in the century it was enlarged and carried up to the same height as the main elevation. Several rooms behind the east and south fronts retain early to mid 18th-century fittings. The main staircase was probably moved to its present position in the later 18th century. Before c. 1900 the house was more than once enlarged and redecorated. 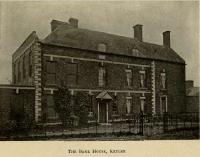